Like many of my colleagues I’m looking to become a PC, and as I don’t have anything tying me down, I can and will go anywhere in the country to go full time.

I’m originally from Leicester so I naturally looked there, part of the training is to do a foundation degree in criminology. Also, the Met being the biggest force by a long shot, and with a recruitment drive sometime soon, I thought I’d check there. I noticed you need some kind of certificate to even be eligible to apply, which would set you back roughly £1,000.

What do people think of this? Is it a good way or lowering the amount of applicants and sorting out those likely to make good PCs early on? Or is it much more a disgusting way of preventing people with less money from applying, with a course they can’t afford and the lower starting pay? Despite the fact they could be fantastic Constables.

I know many forces are bringing in things like this, could you post this to see what people thing on this please? 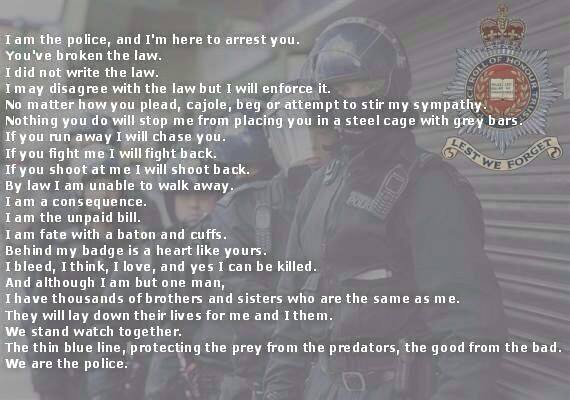 Slightly altered from End of Watch but sums up for all officers
One of the main things a car criminal looks for! 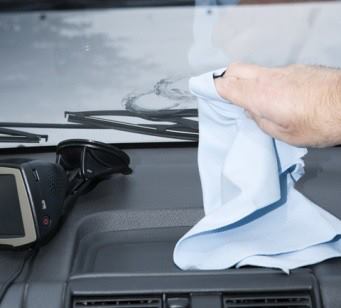 These little cloths are ideal and always good for the car. Safer Neighbourhood Teams give these out to remove the circular marks left by the suckers of your Sat Nav. Those rings are always a tell tale there may be a sat nav hidden in the glovebox — with Richard Cosgriff.
whole life sentence for the Killer!

Dale Cregan will spend the rest of his life in jail for four murders, including those of two police officers in Greater Manchester.

He also admitted the attempted murders of John Collins, Michael Belcher and Ryan Priding during the attack on Mark Short at a Droylsden pub in May 2012.

He was cleared of a charge of attempted murder of Sharon Hark.

Passing a whole-life sentence at Preston Crown Court, Mr Justice Holroyde QC said Cregan had had “a cold-blooded and ruthless determination to end the lives of PCs Bone and Hughes”.

“You acted with premeditated savagery [and] drew those two officers into a calculated trap to kill them,” he said.

Four other men were jailed for their parts in the killings of David and Mark Short and one further man was jailed for assisting an offender.

Luke Livesey, 28, and Damian Gorman, 38, were each jailed for 33 years for the murder of Mark Short and the three attempted murders at the Cotton Tree Inn in Droylsden.

Anthony Wilkinson, 34, and Jermaine Ward, 24, were jailed for 35 years and 33 years respectively for killing David Short at his Clayton home in August.

Mohammed Imran Ali, 32, was jailed for seven years for taking Cregan, Wilkinson and Ward to hide-out in Yorkshire after the murder of David Short.

Applications are now open for the Police Scotland Special Constable September intake. This will be based on the successful trial intake in March this year. Anyone interested in hearing more don’t hesitate to ask. 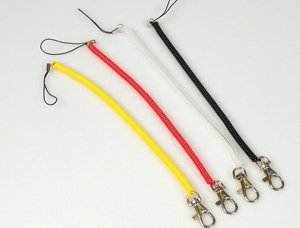 Okay for todays crime prevention handy little gadget comes the purse/mobile phone cable.
Loop one end through the mobile or through the zip of the purse and attach the inside to your handbag. When someone grabs your purse or phone when trying to do dipping the cable stretches but doesnt allow it to be taken.
Very sneaky… SHARE this 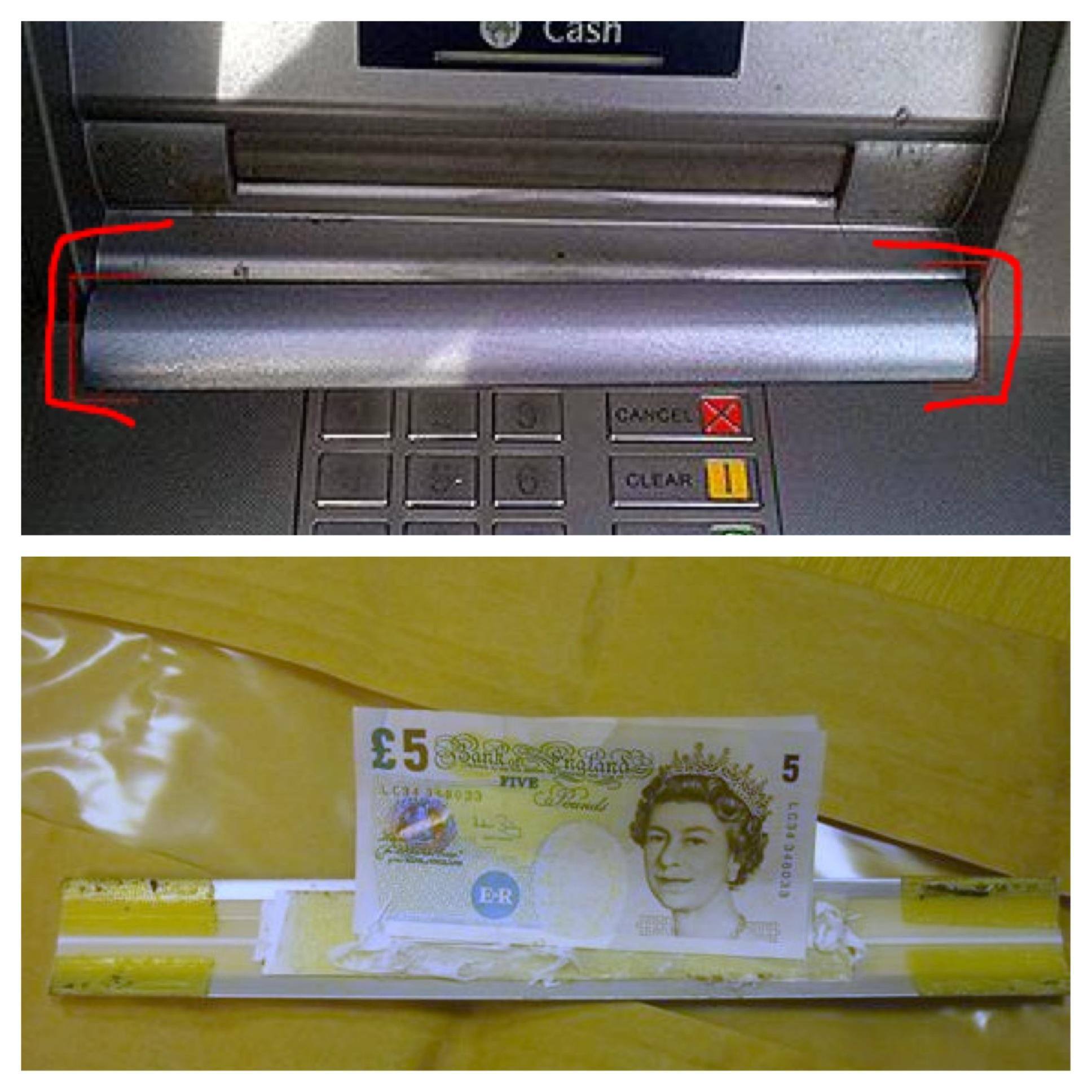 Glue traps normally sold to catch rats and mice are being used in bank cash machine thefts. They are being concealed in a silver strip of plastic which then covers the slot where your money is deposited.

Those who are victims of the crime then walk away from the cash machine believing that it is simply broken.

The criminals then move in and remove the device from the machine with the cash attached to the glue.

Check the cash machine and report anything suspicious.

If you experience problems withdrawing cash then call your bank or credit card company immediately.

This just might bring a tear to your eye…

An emotional farewell: Police officers salute K-9 as he goes on his ‘final journey’

The dog was laid to rest after a brief battle with kidney disease by handler Ptl. Jamie Lebretton, who lead the K-9 through a gauntlet of officers paying tribute to the crime fighting canine.

Fellow Massachusetts police officers pay tribute to Kaiser, a German Shepard in the K-9 unit suffering from kidney disease, as he is walks into the pet hospital to be put down.

In a heart-breaking Facebook post on the Plymouth Police Working Dog Foundation’s page Officer Lebretton wrote, ‘It is with deep regret and sorrow that I announce the retirement of my partner K-9 Kaiser. Kaiser was recently diagnosed with severe kidney disease/failure … [He] battled this disease with vigor and toughness like I have never seen before.’

Lebretton explained that after the diagnosis, Kaiser’s health suffered from rapid decline, forcing his handler to make the ‘heart wrenching’ decision to put him down.

News of the touching send off soon went viral after a photo of a sad-looking Kaiser being led into the animal hospital flanked by over a dozen police officers was posted to Reddit.

Kaiser, a German Shepard, was taken in to the Plymouth, Massachusetts K-9 unit at five-months old. He was put to sleep only two years later following a battle with kidney disease
Kaiser joined the Plymouth police force in March 2011 after a local family volunteered to donate the five month old pup to the department.

‘I ventured to their house and was greeted by a 5 month old German Sheperd who was more concerned with standing his ground and protecting their beautiful 2 children then allowing us … to greet him,’ a fellow K-9 handler recounted on the social media site.

Once he was adopted into the police department, Kaiser immediately formed a connection with Officer Lebretton, who at the time was still in K-9 Patrol Academy.

Kaiser and his K-9 handler Officer Jamie LeBretton pose for the camera. LeBretton gave an emotional eulogy about his fallen partner on Facebook, after he was forced to put the suffering dog down
The dog went on to have an accomplished career, leaving behind tales of his ‘legendary finds and the countless ass kicking of bad guys,’ the unnamed handler wrote.

After the funeral Lebretton thanked the officers for their expressions of sympathy.

‘Never in my career have I ever been so proud,’ he said, ‘You out did yourselves today. I could not have asked for a better send off.’

Seen here with his K-9 unit handlers, Kaiser, the Massachusetts police dog who recently died of kidney failure, trains to attack a criminal.

Despite the dog’s short time on the force Lebretton testified to the pup’s love for the job.

Praising the K-9 he wrote, ‘Kaiser taught me more about myself and my profession than I could have ever taught him. I feel privileged to have had a front row seat to witness his bravery and heroic actions.’

Dozens of officers line up outside of the pet cemetery to pay tribute to Kaiser, a police dog who was put down following his battle with kidney failure.

In a final eulogy on the social media site Lebretton spoke directly to his fallen furry partner writing,

‘RIP my boy. I could not have asked for a better partner or friend … You made me a better person, a better handler, and a better cop. Till we meet again Kai. I love you and will miss you daily.’ 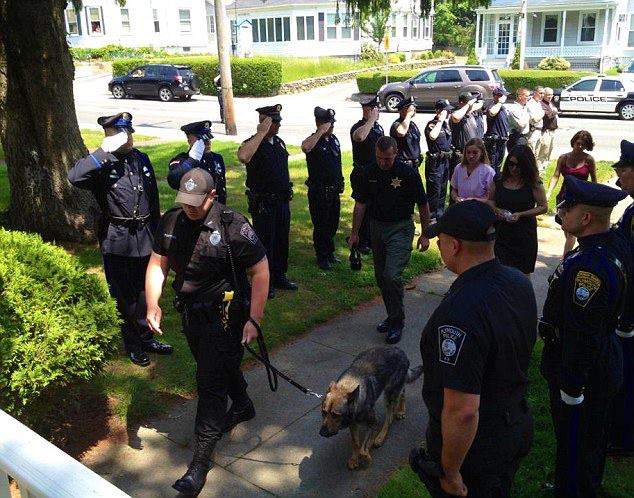